The First Ascension of Jesus Christ into Heaven

The First Ascension of Jesus Christ into Heaven
By Frank Manasseri

When we study the scriptures closely, we learn that the Bible describes two ascensions of the Lord Jesus into heaven. The second and final ascension was from the Mount of Olives with the Apostles in attendance. The first was on the morning of His resurrection from the dead in the presence of Mary Magdalene.

On the morning when the Father raised Christ from the dead, Jesus as the High Priest after the order of Melchizedek, ascended into the third heaven, and entered into the Holiest of Holies (in heaven) to sprinkle His own sinless blood on the Mercy seat cleansing those who believe in His name from all sin

But Mary stood without at the sepulchre weeping: and as she wept, she stooped down, and looked into the sepulchre, and seeth two angels in white sitting, the one at the head, and the other at the feet, where the body of Jesus had lain. 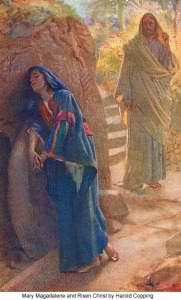 And they say unto her, Woman, why weepest thou? She saith unto them, Because they have taken away my Lord, and I know not where they have laid him.

And when she had thus said, she turned herself back, and saw Jesus standing, and knew not that it was Jesus.

Jesus saith unto her, Woman, why weepest thou? Whom seekest thou? She, supposing him to be the gardener, saith unto him, Sir, if thou have borne him hence, tell me where thou hast laid him, and I will take him away.

Imagine what it must have been like the first time Jesus ascended into heaven on the morning of His resurrection? The attention of all the heavenly hosts were riveted on Him as He appeared as High Priest after the order of Melchizedek to fulfill His priestly duty of the atonement. What an awesome moment it must have been as the hosts of heaven watched as Christ approached the Holy of Holies in Heaven. Just as the earthly High Priest performed his duty on the Day of Atonement of the sprinkling of the blood of the sacrificial lamb on the Mercy Seat in the Temple on earth, Jesus Christ in His role of High Priest after the order of Melchizedek, was carrying His own precious blood into the Temple of heaven. The blood of the Lamb of God that takes away the sins of the world was sprinkled by Christ on the Mercy Seat in heaven. At this most significant moment our redemption was complete.

All the eyes of heaven were watching as the Son of the Living God entered into the Holy place to cleanse the sins of His followers with His own precious blood. The plan of salvation was complete as His pure, precious blood was sprinkled on the Mercy seat. Redemption was complete and sealed for eternity! What joy and rejoicing must have filled heaven!

Hebrews 9:24-28 (KJV)
For Christ is not entered into the holy places made with hands, which are the figures of the true; but into heaven itself, now to appear in the presence of God for us:

Nor yet that he should offer himself often, as the high priest entereth into the holy place every year with blood of others;

For then must he often have suffered since the foundation of the world: but now once in the end of the world hath he appeared to put away sin by the sacrifice of himself.

And as it is appointed unto men once to die, but after this the judgment:

So Christ was once offered to bear the sins of many; and unto them that look for him shall he appear the second time without sin unto salvation.

After ascending into heaven and the sprinkling of His own blood on the Mercy Seat was completed, Christ returned to Jerusalem and spent the next forty days with his disciples in His resurrected body, teaching them the things concerning the Kingdom of God.
Acts 1:1-3 (AMP):
In the former account [which I prepared], O Theophilus, I made [a continuous report] dealing with all the things which Jesus began to do and to teach

Until the day when He ascended, after He through the Holy Spirit had instructed and commanded the apostles (special messengers) whom He had chosen.

To them also He showed Himself alive after His passion (His suffering in the garden and on the cross) by [a series of] many convincing demonstrations [unquestionable evidences and infallible proofs], appearing to them during forty days and talking [to them] about the things of the kingdom of God.

During the forty days after His resurrection Christ showed Himself alive after His passion by many infallible proofs and speaking of the things pertaining to the Kingdom of God.